Home | Bolly News | Parineeti Chopra has lost her heart to ‘Student of the Year’ Varun Dhawan!

Parineeti Chopra has lost her heart to ‘Student of the Year’ Varun Dhawan! 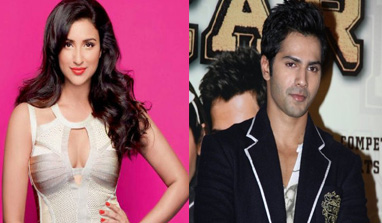 Zeenews Bureau New Delhi: Guess who seems to be hit by the cupid’s arrow in B-Town these days? Well, it is the girl who has stolen a million hearts with her smashing performances in films like ‘Ladies Vs Ricky Behl’ and ‘Ishaqzaade’. Yes, it is none other than but PC Junior aka Parineeti Chopra who has been going gaga over the new stud in Bollywood – Varun Dhawan!

A secret source close to Parineeti has disclosed how the actress was completely bowled over by Varun after she saw the trailer of his upcoming debut movie ‘Student of the Year’ and was asking friends for his number to congratulate him via sms! Actually, when Parineeti was working an intern with the Yash Raj Films, she had crossed paths with Varun but the guy got little attention from her. But now that Varun is all set to show-off his chiseled frame in his upcoming flick, Parineeti just can’t take her eyes off the man! Buzz is that Pari has even jokingly requested Karan Johar to play cupid for her so that she can make her way into the heart of Varun. Well, we have to wait to see how or whether at all Varun reciprocates his new admirer Parineeti’s feelings?